HEARTS OF THE WORLD
2015 INDIA TOUR
﻿Our team has recently completed our most ambitious project  to date, a twelve-part workshop series throughout the diverse cultural landscapes of India. With our  improved  curriculum we invited hundreds of children from a variety of backgrounds to explore their unique potential and dreams through painting. We look forward to sharing the stories and artwork from our journey at our upcoming exhibition. To be announced...
SHOW YOUR SUPPORT

From mid March through July, 2015, we traveled the route below, beginning in New Delhi, driving east to Varanasi, then across to Kolkata and Jhilimili in West Bengal. We went South to Puducherry, across to Kerala and then North to Himachal Pradesh with several stops along the way. After traveling 8,000 road-miles and conducting twelve workshops, we returned to Delhi for a retrospective show on June 20th at Lokayata Art Gallery in Hauz Khas Village to tell the stories of the hearts of India. 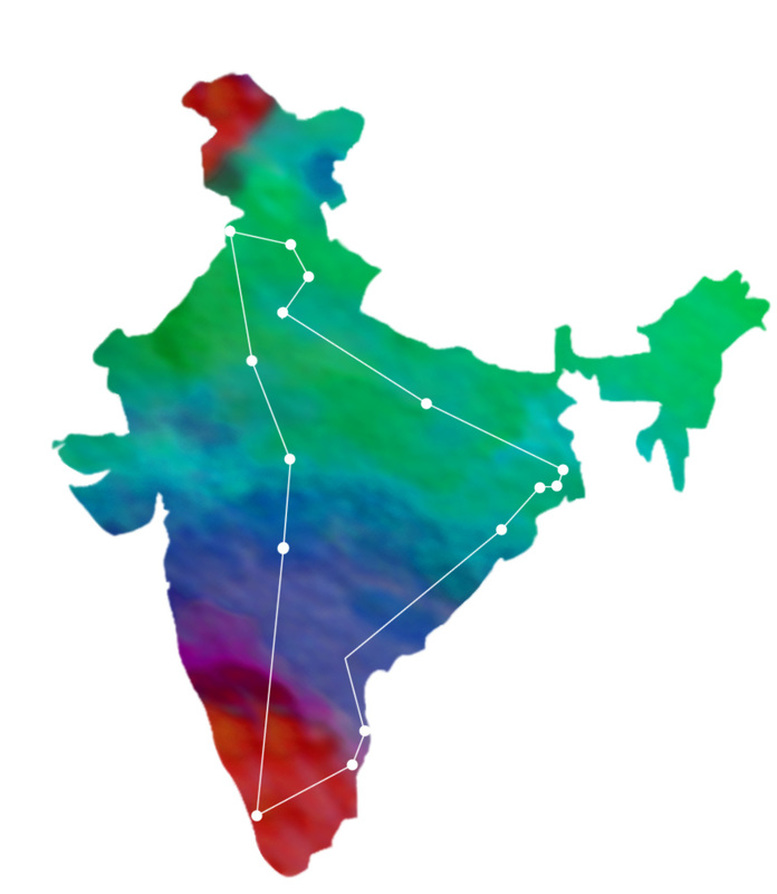 NEW DELHI- March 16-30
In Delhi we purchased and outfitted our vehicle, met with Lokayata Art Gallery, and gathered materials for our workshops. We also held an impromptu workshop at Hauz Khas Village.

VARANASI- March 31-APRIL 5
We visited and conducted a workshop at the Bal Ashram orphanage who ”aspire to raise heart-centered
citizens” from abandoned children ages 2 to 17.

KOLKATA (Calcutta)- April 6- April 10
Here we held a workshop with orphans at the Kasba Girls Home in the Kasba “slum area” that arose to house tannery workers.

SUNDARBAN REGION- April 10-12
We worked with the children of Sundarban Orphanage which was started by the locally famous Taxi driver Mohammad Jalaluddin Gazi in Thakurchak Village of the climatically volatile river delta Sundarban region of Southern West Bengal.

JANGAL MAHAL - April 13-17
We joined our partner Asis Banerjie, founder of the JAGO FOundation, to conduct workshops with various remote tribal groups in JHILIMILI, an area that was until recently controlled by Maoist militants.

KHARAGPUR, WEST BENGAL - April 17-18
We were invited to host a workshop in Tangasole at C.R.P.F (India's National Guard) headquarters of the 165th Battalion with children of officers and from local schools.

CHENNAI- APRIL 20-26
We visited Shiri Saradha Sakthi Peetam Orphanage and held a workshop with teenage boys, inviting them to imagine and paint their greatest dreams for life.

PUDUCHERRY (Pondicherry) - April 26- 31
Here we visited the "Children's Land" of Sadhana Forest in Auroville, where children have been allocated their own land to use and develop as they choose.

KOCHI, KERALA - May 3- May 13
We visited the Crescent Girls Orphanage in Kochi. Kerala is a former Communist state, one of the
lesser developed ones, yet it boasts a 100 percent literacy rate.

SIRSA, HARYANA - May 17 - 19
We hosted our largest workshop to date with over four hundred students at Sagar Mani Highschool.

HIMACHAL PRADESH - May 27- June 10
At Upper Dharamshala in the foothills of the Himalayas , we visited the Dalai Lama's school for young Tibetan monks.

NEW DELHI - June 14 -27
We returned to New Delhi to host our retrospective Gallery show on June 20th at Lokayata Gallery in Hauz khas Village. Rakesh Senger of Bachpan Bachao Andolan was our Chief guest, camel rides, iced gola and pani puri were provided for all and everyone was invited to paint their heart at the open painting table.

VISIT US AT HEARTS OF THE WORLD . COM

Thank you for your interest. If you have any questions, helpful information or contacts that can bring Hearts of the World to a fuller fruition, please email us through the form below or at: info@HeartsoftheWorld.org